5 Google Products You’re Probably Not Using (And Why)

This past weekend, my friend Kristina came to visit. While Kristina and I technically know each other through mutual friends, I like to refer to her as my ‘fan who became friend’. Perhaps this is because, before Kristina, I had no fans. And now that we’re friends, I’m back to being fanless and therefore want to bask in the glory of yesteryear. Kristina was a fan of my blog. The story goes that a Google Reader obsessed Kristina was showing mutual-friend-Stephanie her feed. Stephanie suggested she add my blog to the reader as I, at the time, was doing a lot of food blogging. Kristina did, and for whatever reason, enjoyed what she read. A year later, we met, and two years later, we’re such good friends that I let her sleep on my couch for three days and she does my dishes as a thank-you.

Of course, before I met Kristina, all I knew about her was that she was an avid reader of my blog, which, as previously mentioned, she accessed through Google Reader. I had never used Google Reader and so decided to try it out. For a while Google Reader was my best friend: I had never read so many blogs or articles. Every day was a gaggle of something new and interesting as I had successfully curated my daily news. Eventually though – probably around the time simultaneously accessing two Google accounts became freaking impossible – I stopped. It wasn’t until Kristina and I sat on my couch Sunday morning doing our eerily-similar laptop/phone/coffee routine (me staring blankly at Facebook while she excitedly read through the days stories) that I rekindled my love for the service.

Anxious to see if I could add Google Reader to my work account, I accessed a list of available (and free) Google products. As I perused this list, I realized that I only used a handful of these apps, and that there were even some I had never heard of. I felt a bit like Andy Rooney – a self proclaimed completely average person, who was amazingly out of touch with the mainstream. However, the more that I explored these apps, I realized that I probably wasn’t the only one oblivious to them.

Google Latitude is Google’s less-than-impressive take on Foursquare. Perhaps the only advantage to using Google Latitude is the ability to access all your Google contacts and G-Chat with them through the application. Otherwise, nothing about the app is all that exciting or even remotely threatening to the feature rich Foursquare. In fact, Google Latitude’s late release and hackneyed approach to location based social networking is unfortunately typical of many of the market driven applications to come out of Google labs recently. Take for example Google Offers (currently only available in the US) which mimics the deal-of-the-day offers by GroupOn, Fab Find, Living Social, Kijiji Daily Deals, Dealicious, WagJag…you get the picture. While the video claims they’ve come up with a great new way to find deals, Google Offers doesn’t actually offer anything different from any of the other companies in the preceding list. I suppose Google is trying to get by on brand recognition and their built in user base; however, much of that brand recognition is centred around the ideology that Google is a place for innovators and latching onto a growing trend is far from innovative.

You aren’t using Google Latitude because Foursquare is better.

I first heard about SketchUp while attending a conference on Pre Visualization (I was late to the party, I know). I knew as soon as I heard of it, I would never ever use it: 3D modeling is far too advanced for someone who can barely draw a stick figure. That said, SketchUp does have an impressive 11 year history, integrates with Google Maps, and Google holds a patent on it’s Push/Pull technology.

You aren’t using SketchUp because the last 3D model you made came with it’s own paints, and you’d like to keep it that way. 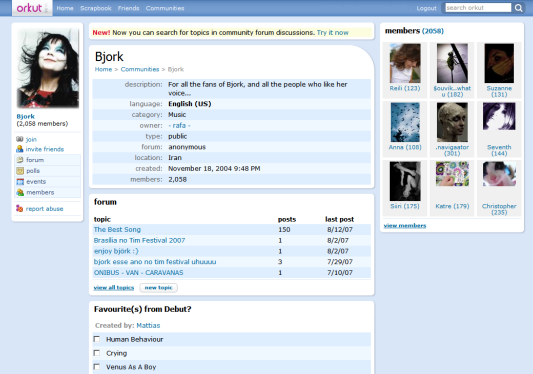 Before MySpace was the place to be, and after Google had failed to acquire Friendster, Google launched Orkut, an invitation-only social network. At first, Orkut was quite popular with a large user base which grew primarily from word of mouth. Nearly 10 years later and Orkut holds the distinction of a) being less popular than MySpace and b) still being in Beta.

Apparently Orkut’s failure in North America has been blamed on it’s slowness. Google was so startled by its initial popularity (and subsequent weight on it’s server) that they were totally unprepared to scale up to meet user demands. American users thus left the service as MySpace and Facebook entered the social network scene. Users in India and Brazil, however, have remained quite loyal to Orkut (which does have an impressive list of features).

You aren’t using Orkut because 500 million of your closest friends are on Facebook.

Google Docs just happens to be one of Stitch Media’s favourite Google applications. The ability to write and edit documents together as a company has been extremely beneficial to Stitch Media and has offered us a very efficient means to create documents, budgets, and flowcharts.

While I’m sure lots of others use Google Docs on a regular basis, I’m often surprised that there aren’t more people in my social circle familiar with the application. Personally, I see a great value to Google Docs for a number of people – not just for those collaborating on a document with co-workers. Students, for example, would benefit greatly from Google Docs. I remember as a University student I would often email myself half written essays or bits of ActionScript as my G-Mail account seemed like a safe place to store work in progress – especially since I was working on such a cheap and unreliable system. In addition to offering its self as a natural safe haven for working documents, Google Docs collaborative features make multi-user editing very easy (and you can watch the edits in real time). My roommates and I probably would have had a much more difficult time in University if we didn’t have each other to edit essays and share study notes and I can only imagine how much more efficient we would have been had we used Google Docs.

You aren’t using Google Docs because you like Microsoft Word and hate other people’s opinions.

I’ll be honest, when I first heard about Google Wave I was pumped – Google was going to do what Google does best: revolutionize the way we used the internet. The hype surrounding Wave was immense – it was invite only, and it seemed like every cool person you knew was getting an invite before you.

It thus came as no surprise when Google Wave announced last year that although wave.google.com was still going to be active, they were ceasing all development on the program. Rather than launch into a tireless rant about Google Wave, I believe Benjamin Nortier did an excellent job summarizing why Google Wave “failed”:

You aren’t using Google Wave because it was really, really bad